Rescue Story: Cat Tangled in Net in Middle of Winter 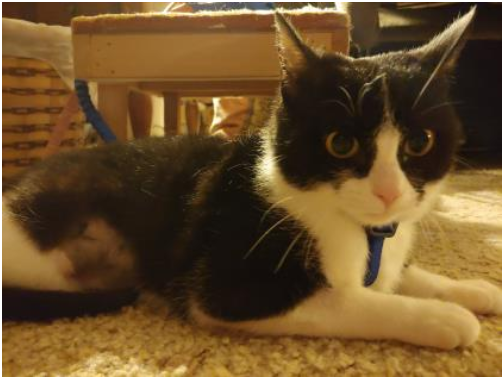 It was January 16th and very cold. Temperatures barely rose above freezing that day and the wind gusted wildly. The shelter received a distressing call about a cat stuck in a baseball net not far away at the Newberry Little League field. Staff member Wendy reported to the scene and found a kitty so cold and stiff to the touch that she feared she had already passed away.

Wendy found the net wrapped tightly around at least one of the cat’s back legs. How long she had been there, nobody knew. Wendy untangled the net and took the cat right away to a veterinarian. At the vet, they started Nettie (yes, she was named because of the net) on fluids and other medical care for shock and very low temperature. Vet staff found that she was young, around six months old, and that the circulation to some of her toes and hind leg had been cut off. They wanted to give her limbs a chance to recover once blood was back in them, so they gave her medication and sent her back to the SPCA to be watched. 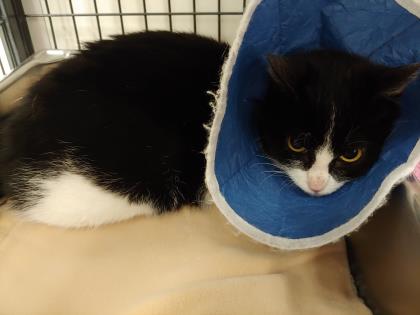 “Nettie was probably a ‘feral’ (or ‘community cat’) to begin with,” says Animal Team Lead, Kelli Smith. “Once she came out of shock, she was a very wild little thing.” This made checking her wound and giving her medication quite the challenge.

Despite the challenge, shelter staff persisted in caring for Nettie. It was not long before they noticed that, despite having some time to heal, her leg looked very strange. They rushed her to the vet and it was determined that, alas, the bottom part of her leg was dead and needed to be amputated, along with a few toes from her other foot. She went to a foster home to rest and recover and become more used to humans.

“She continued to be nervous around humans in her foster home, but really loved the other cats, ” says Kelli. After about three months, she was ready to come back to the shelter to be placed for adoption. Staff chose to put her in the Four Seasons Room where she could be with other cats. Despite the fact that she was very scared in the room and hid most of the time, it only took seven days for her to be adopted! Way to go, Nettie!

We wish Nettie and her forever family all the best and are thrilled that we could have a part in her story.

The SPCA is closed to the public. We are providing essential services, including adoptions, by appointment. Please call the shelter at 570-322-4646 to make an appointment.