Life is Short, but Sweet for Certain 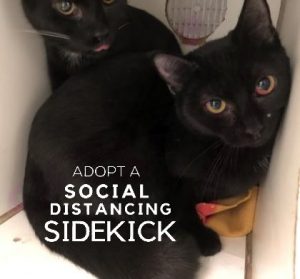 Life may be short, but it is sweet for certain. Just ask Charlotte. You see, Charlotte was blessed to grow up with a great mom. Her mother was an outside cat when Charlotte and her three brothers were born. Though her mom had to battle unpredictable weather and food supplies, she always managed to take excellent care of her four kittens. What Charlotte’s mom did not know was that she was sick with Feline Leukemia. She had picked it up from another cat, perhaps by sharing a food bowl or being in close contact with him or her. The disease left her more susceptible to illness and dental complications. And tragically, in the simple act of having babies in her womb and then nursing them, she passed the disease on to her little ones.

The Lycoming County SPCA first became introduced to the mother cat and her babies when they were brought to our shelter early last April. The kittens were around four weeks old and they, along with their mom, were suffering from Upper Respiratory Infections. They had been found stray in a small town and were not able to be trapped all at the same time. Slowly over the course of about a week, the family was trapped and re-united at the shelter. During intake, it was discovered that they each needed medical care to treat for infected eyes, noses, and lungs. A routine blood test discovered that each had Feline Leukemia (or FeLV). Thankfully, they were in the right place. The Lycoming County SPCA gave them just what they needed: rest, care, and plenty of love.

Under the shelter’s loving care, the kittens recovered and soon began to thrive, chasing each other around their cubbies and always seeking a way to pop their heads out of the top of their enclosure. Their mother was able to be placed at Best Friends Animal Sanctuary in Utah in a special house just for adoptable cats with FeLV. The kittens went through another bout of Upper Respiratory Infection here at the shelter this winter, but now they are healthy enough to take on their next big adventure: finding forever homes! 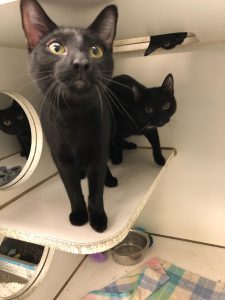 This photograph perfectly captures the four kittens and their personalities. Charles is outgoing and right up front. Joey can also be adventurous and is peeking out behind Charles. Kyle is a bit shyer and is peeking down from his cubby above, and sweet Charlotte is seen peeking out of her cubby on the left.

Now, did you know that most cats with FeLV live normal lives, but their life span tends to be significantly shorter? This is particularly true if they contracted the disease as kittens. According to Best Friends, around 80 percent of kittens with FeLV do not live past three years, and most die within a year. Seeing as this is the case, we are excited that the four babies are almost one year old and are doing well! And because their lives may not be as long as other cats, we are eager to see them in a loving forever home as soon as possible. We think that they will do best if adopted in pairs (or all four together, if you desire) as they have always lived with one another. They can be shy, but just like any other cat, they love to play, explore, and live life to the fullest!

Could you be the one to make Charlotte and her brothers’ dreams come true? They are eager to make every moment count with their new families! During this time of a virus of our own, the SPCA is open by appointment only. Interested families may call the SPCA at 570-322-4646 to set up a meet and greet.

What is FeLV?
FeLV stands for feline leukemia virus. As the name implies, it is a viral infection of cats that affects a cat’s immune system and bone marrow.

Can FeLV-negative and FeLV-positive cats live together?
A negative cat and positive cat could certainly live in the same house, as long as they do not have contact with each other.

Can humans catch FeLV?
Absolutely not.

How do cats get FeLV?
The virus is typically spread from infected cats to non-infected cats through close personal contact, usually involving saliva. It can be spread by grooming, shared food bowls, bites and other forms of close contact. It can also be transmitted from a mother cat to a kitten in utero and from the milk of an infected cat. Some less common but possible causes of transmission include fleas, blood transfusions or contaminated needles. FeLV is typically not spread through waste.

What to Do If You Find Kittens Outside
Hector Finds Home at Last
We are open by appointment. Please call 570-322-4646 for your appointment. We ask that you wear a mask when you come in. The SPCA is following CDC and PA Dept. of Health guidelines by limiting the number of people in the shelter, social distancing, and sanitation. We appreciate your cooperation.