Happily Ever After – “The Little Hippo” Finds a Home – #GivingTuesday 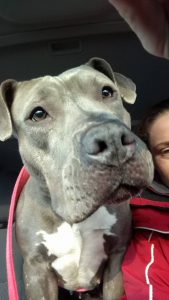 Jane had been one of our longest-term residents.

For the final story in our #GivingTuesday series, we present to you one of our happiest adoption stories from 2018.

She had been here for over a year. Little Jane, or “Little Hippo,” as she was affectionally called, was wary of humans and was having a hard time catching the eye of potential adopters. The one-year-old female American Staffordshire Terrier was brought in as a stray in the summer of 2017. She had been found in downtown Newberry. How long she was out on the streets, no one knows. Her initial exam and behavioral testing described her as in “survival mode.” “She was very hand shy,” staff remember. “When a hand was high in motion or holding objects, she would cower or duck and become fearful. When we tested her for food aggression and reached for her food, she cowered and hunched, as well.” 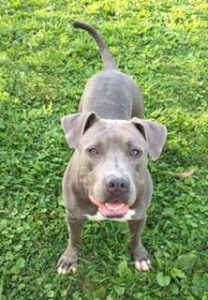 What had been in Jane’s past? What had she learned about humans? What could her future look like? Staff began to work with her, slowly introducing her to people and other dogs. “She had a very high prey drive,” says Kabrina Schweikart, Kennel Manager. “She was very tense around other dogs and would lunge to go after them.” She would reach for and nip at people at times, too. The American Kennel Club describes American Staffordshire Terriers as, “a people-oriented dog that thrives when he is made part of the family and given a job to do. ” Jane did not have a family or a job to do. She was stressed and confused. Months went by. Potential adopters came and met with her, but Jane often acted out towards them, causing them to choose someone else.

What can you do with a dog like Jane? Transfer her to a more experienced rescue? Keep working with her? Who could her forever family be? SPCA supporters have stepped in and saved the day for so many homeless pets in Lycoming County. What could they do for Jane?

Jane on a car ride with the Freedom Runners.

“One of the first things that we did for Jane was enroll her in our Freedom Runners program,” Kabrina explains. “Freedom Runners is a program where volunteers take the dogs out on car rides and walks. We go to places like Riverfront Park, the bike path, and the Loyalsock Creek. It helps dogs get out of the shelter and learn how to interact in a group setting with other people and dogs.” Jane was tense, but began to respond well to Freedom Runners. She bonded with her handler, Kelli, and would lay her chin on her shoulder as they drove. “She loved car rides,” Kelli says. “We also learned that she tended to snort and had a soft spot for biscuits with peanut butter.” Staff and volunteers were delighted to learn more about the soft side of Jane.

Still, Jane remained at the shelter. Her one-year anniversary went by. While her personality had become friendlier, she still remained stand-offish and tense around new people. Then, one month after her one-year anniversary, the magic happened. A man came into the shelter and little Jane caught his eye. “I worried every time someone came to potentially adopt Jane,” Kelli says. “How would she act with him? Would they be able to understand her, to handle her?” The tall man was plenty able to handle Jane. More than that, he loved her. “At their first meet and greet, she showed him all sides of her personality,” Kelli laughs. “It didn’t phase him.”

After 394 days at the shelter, Jane hopped right into his car and went home. Missy Black, Volunteer Manager, was elated to tell volunteers the news: “She has a new daddy, who will spoil her and love her forever. This is a special girl and she needed an even more special home. She got it. We are elated for her.” Just goes to show that there is a home for everyone. Thank you SPCA supporters for enabling Jane to get her happily ever after! 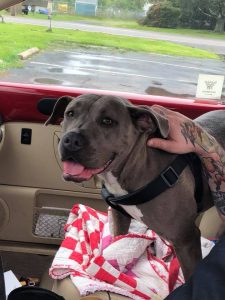 Jane on her car ride home.

Today, #GivingTuesday, please consider giving so that pets like Jane can have a chance at their own happily-ever-after.

A Home for the Holidays - An Adoption Story
Take Care, Old Friend - #GivingTuesday