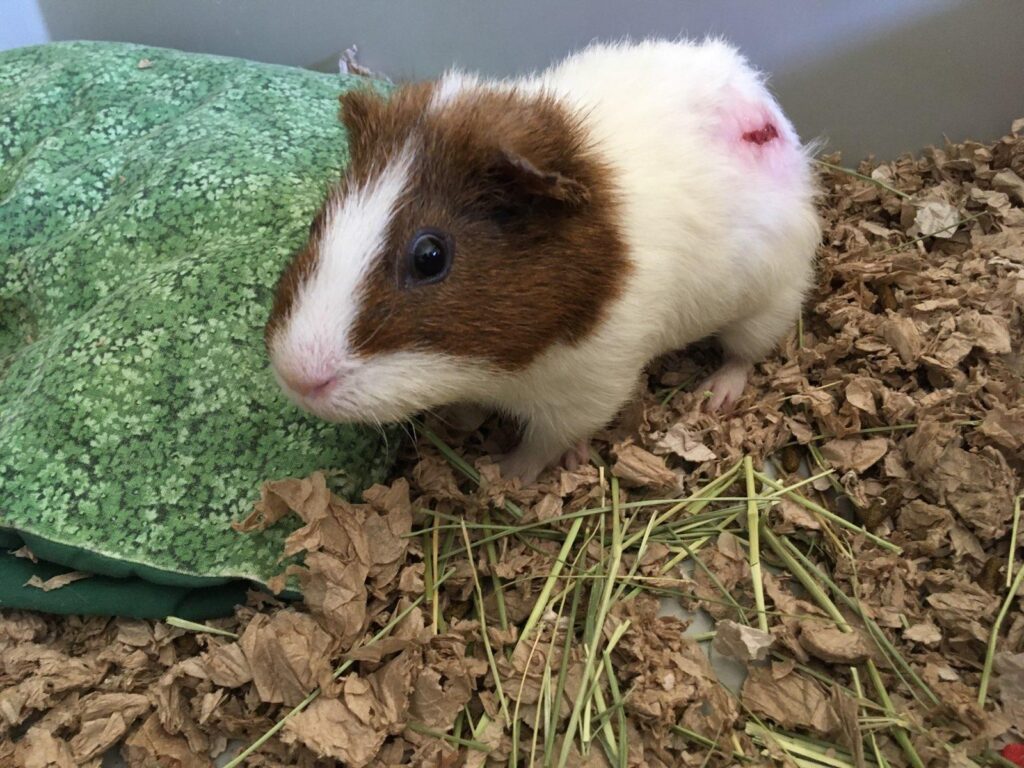 It was during one of the hottest weeks of the summer when we received a phone call from a plumbing company in town. “There is a guinea pig…living under our trailer,” the plumber on the other end of the phone explained, “and try as we might, we cannot catch him.” It is not unusual for the staff at the Lycoming County SPCA to receive phone calls about stray dogs and cats. There was even a phone call about a runaway stray goat in downtown Williamsport this year. But stray guinea pigs? Now that was a new one.

After looking at one another in wonder, SPCA staff loaded up and set off to rescue the pig. Now, let us tell you, guinea pigs are prey animals and do not like to be caught. Therefore, it should come as no surprise that it took four, yes, four SPCA staff members and one of the plumbing crewmen to wrangle the feisty little fella. What he had been eating and drinking during those hot days is anyone’s guess. He had survived not just the heat but at least one wild thunderstorm during his time outside. When we placed him in a crate, he ate and ate and drank for hours. The poor guy!

He was given the name Rambo and besides his thin condition, he also had large open sores on his back. Oh, they looked so painful. Thankfully, a bath was all he needed for them to begin to heal up. He was taken to a foster home where he received just what he needed: love, care, and plenty of timothy hay. Here are photographs from Rambo’s rescue day: 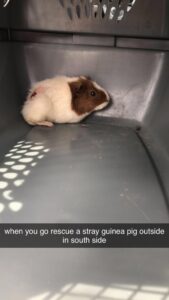 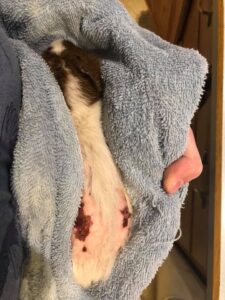 A month later, and Rambo looks like a new pig! 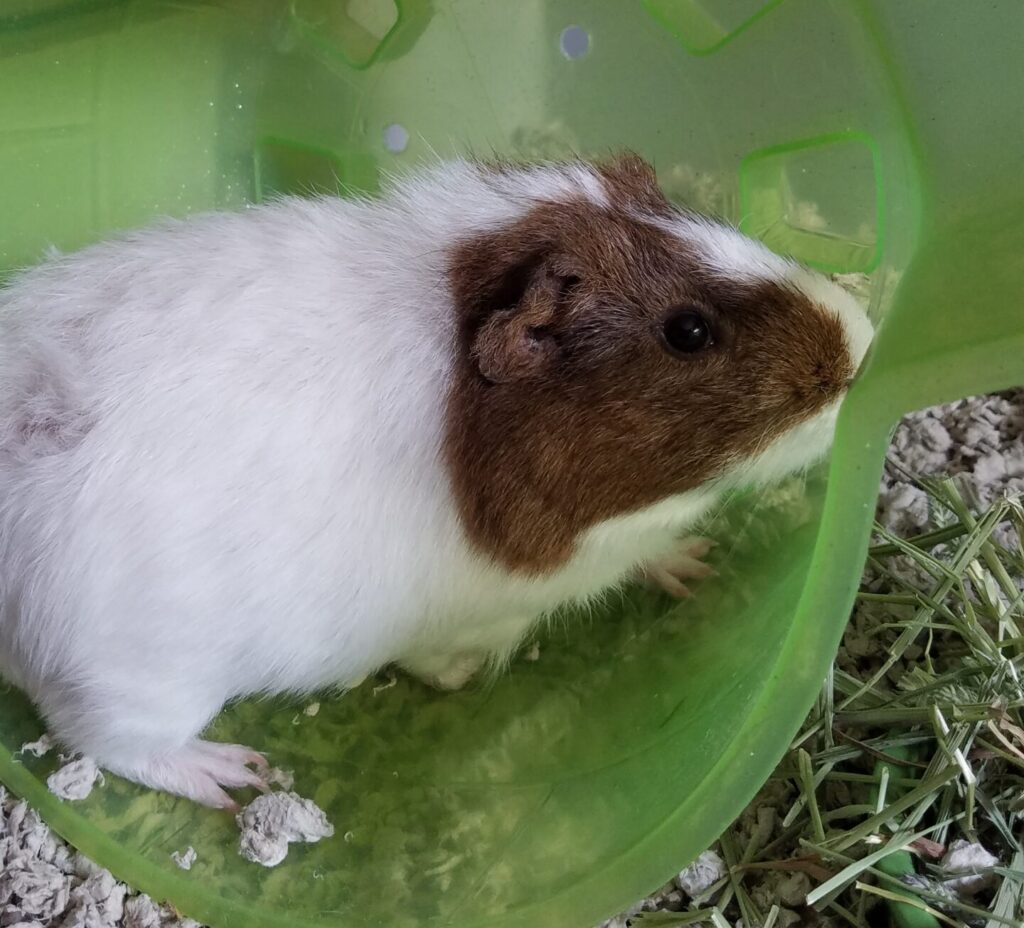 His sores are healing nicely and he has gained weight. His foster mom says, “He is a very timid little boy and runs his little legs off if he sees someone reaching for him, but given his adventure outside we don’t blame him. He is a big fan of veggies and enjoys exploring and going out to eat grass (in a pen, of course!).” It may take a little while for Rambo to trust and show his true personality, but we know that a loving home will help him do just that!

*Now, just when you thought the story had ended…

the SPCA received a second phone call the following week, from the same plumbing crew…believe or not, another guinea pig had been found loose, running around their property. 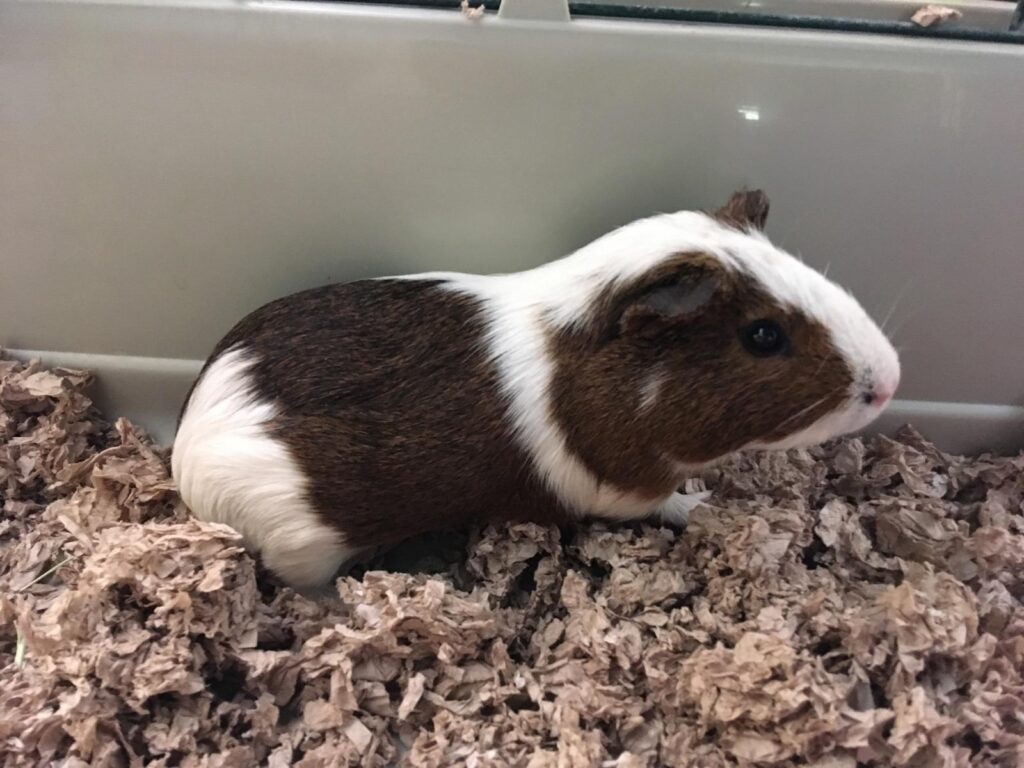 Meet Rocky. He is about the same age as Rambo, so we suspect that they are related. Without further information, it is difficult to determine how they both arrived on the streets. Rocky was not quite as thin as Rambo, but he certainly was not well fed, either. The plumbing crew found him hiding under one of the crewman’s cars. The car was parked over damp, wet earth with some large puddles. That meant that Rocky was really filthy! At the first sight of our staff, Rocky dove into the weeds. Thankfully, the staff was able to capture him in just about five minutes. He was placed in a carrier and the sweet boy giggled with happiness when the staff gave him pellets. Hours later, all of the pellets were gone. He, too, drank a record amount of water.  He joined Rambo in his foster home and the two of them are some of the happiest and fast-growing little piggies you ever did see. They have everything they need, including – soon, they hope – a loving forever home.

Interested in adopting Rambo or Rocky? Download an adoption application and email it to the SPCA today!

Ready for Love: Brutus' Story
Tips for Pet Owners for the Fourth of July