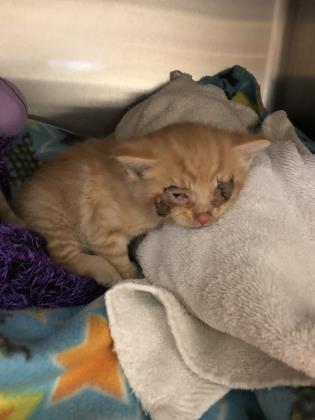 George did not look very heartwarming when he first came in.

New beginnings come twice in the lives of homeless pets – the day they arrive at the Lycoming County SPCA and the day they go home with new families. For George, also lovingly known as Georgie Porgie, his new beginning came in the nick of time.

George was found in an abandoned house as a tiny kitten. His eyes were so infected that they were crusted shut with scabs about the size of a dime and he could not see. SPCA staff were able to gently clean off his right eye and, sickeningly, puss poured out. They placed a warm compress on his left eye and puss also poured out of that eye.  Poor little fella! His left eye’s scab would not loosen and caretakers did not feel comfortable pulling it off in case his eye had ruptured. So they scheduled him to see a veterinarian later that day.

Thankfully, for George, the veterinarian discovered that both of his eyes were intact and okay. A kind vet tech at the office offered to foster the little guy. She tested him for FIV (Feline Immunodeficiency Virus) and he came back positive for the virus. Most cats with FIV live out normal, yet shorter, lives. It was thought that perhaps George’s mother had FIV and he tested positive because her antigens were still in his body from nursing. Only time would tell. Because of his potential virus, he was moved to a new foster home without other kittens.

George continued to grow and thrive and he became a fat and sassy little thing. At his twelve-week re-check, he was re-tested for FIV and this time it came back negative! George’s body had rid itself of his mother’s antibodies over time and he was virus-free. The best news came a few weeks later: George was getting adopted!

From foster home to forever home, SPCA supporters helped this little kitten through every step of the journey. The result: George has never been happier! 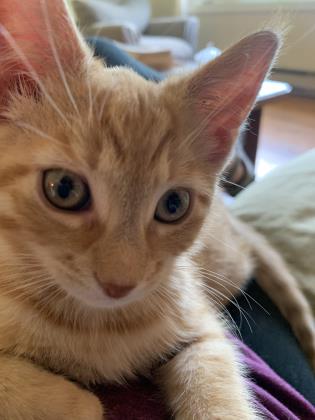 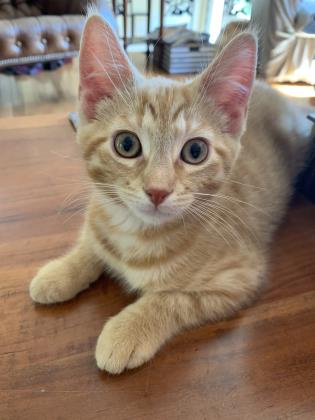 It is a happy tale for little George!

Magical Days for Mattie
Chicken Rescued from the Streets