Sometimes life throws us curveballs. When our world suddenly seems tilted and strange, how do we cope? Often, family and friends provide a sense of safety and reassurance. For Dallas, he found those family and friends here at the Lycoming County SPCA.

Dallas came into the world full of zest and vigor but found himself bounced from home to home during the first year of his life. He lacked stability and a trustworthy person to guide him through the confusing changes. His last owner decided to surrender Dallas to the SPCA in March of 2018 after he experienced landlord issues. He had owned Dallas just four months.

The SPCA was just one more change for Dallas, but fortunately for the young pup, it would be one that gave him the stability he craved. The kennels proved to be too stressful for him, with new people passing by frequently. He was moved to our quarantine kennels in the back to give him time to de-stress. Nicole, one of our Kennel Attendants, took Dallas on as her special project and has been working with him for the last 9 months. He became available for adoption 3 months ago. 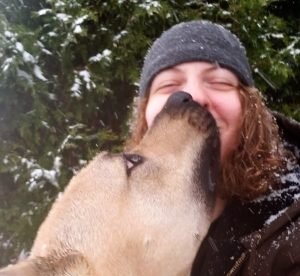 “Dallas is a big goober,” Nicole relates. “His biggest behavioral challenge is his lack of trust in people. He came in undersocialized, so we have been working on introducing him to more people in a safe environment.” Nicole takes Dallas out in our Freedom Runners program, a program where volunteers treat dogs to car rides and walks around town. This gets Dallas out and about and exposes him to other volunteers and SPCA dogs. So far, he is doing great!

Nicole’s main goal is “working off Dallas’ energy so he can focus and train.” He has learned to sit, play tug-of-war, and is working on greeting new people appropriately without jumping. He now knows a significant number of SPCA staff and volunteers, and has had positive meet and greets with potential adopters. “He loves tennis balls, butt scratches, and mini marshmallows,” Nicole explains. “He is still leery of direct eye contact, but loves to approach new people to say hello and give them a kiss.” Nicole describes Dallas’ perfect forever home as, “An active family that has a big back yard and maybe another dog with his similar play style. He will benefit from further training to help him learn the manners he was not taught as a puppy and bond with his new family.”

The SPCA is a haven of love and support for many types of pets, including the scared and confused like Dallas. Every day, donations help us stay open to re-build pets’ lives and give them wings to soar. Dallas is ready and eager for his next big adventure: landing that perfect forever home! If interested in Dallas, call (570-322-4646) or stop in to schedule a meet and greet. Nicole and Dallas will be happy to meet you.

"Fall" for These Birthday Hunks