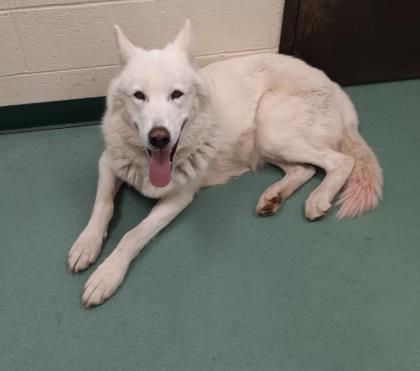 Pearl is one of the fluffiest dogs you’ll ever meet. (And we know the competition among fluffy dogs is pretty fierce.) When she arrived at the Lycoming County SPCA, Pearl had just been found as a stray on a busy street outside of a Starbucks. How she got there, we do not know. Outwardly, the ten-year-old white German Shepherd-mix appeared to be in fairly good health. Inwardly, though, she was so sick, and it was just a matter of time before she became critically ill.

Thanks to you, all dogs that arrive at the SPCA are provided with blood tests and other health screenings. Pearl’s tests came back positive for Lyme Disease and heartworm. While Lyme Disease is serious enough in dogs, heartworm, when untreated, is fatal. Caregivers lost no time in getting Pearl to the veterinarian to see what could be done. Heartworm treatment is not easy on the dog or the caregiver’s pocketbook. Treatment can be potentially toxic to the dog’s body and can cause serious complications, such as life-threatening blood clots to the dog’s lungs. Treatment is also expensive because it requires multiple visits to the veterinarian, blood tests, x-rays, possible hospitalization, and a series of injections. An initial round of treatment was prescribed for Pearl to combat both of her illnesses at the same time. Almost right away, she had a reaction. The day after her first heartworm injection, she was vomiting quite a bit and very lethargic. Further medication was prescribed to help her through her healing process.

And where is Pearl now? Pearl is the proud conqueror of two heartworm injections and she is mending in mind and body more every day. Thanks to you, she knows that she is in good hands, physically and emotionally. She has shown us that she likes walks and lying down afterward to settle in. She enjoys the comfort of having her human nearby as much as possible, and she has also let us know that cats are not her thing. That’s okay, she is free to be her own woman here.

That’s how you have helped make a difference in this part of the world – by generously helping those who cannot speak for themselves.

Velvet: the little guinea pig that could
Lives Saved - Kittens given a second chance