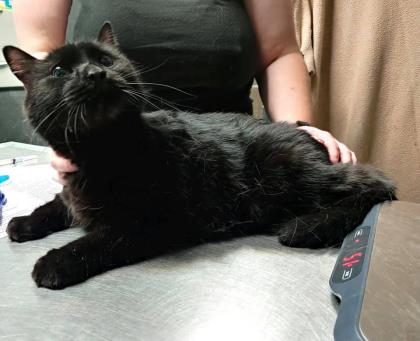 Walt the day he arrived.

Walt and Wally had grown up together in north-central Pennsylvania. They spent their days cuddling, exploring, and sharing life’s ups and downs with each other. At six years and eight years old, the friendly black and orange cats were pretty settled. Then, their lives suddenly changed. Their owner contracted an illness and passed away. A neighbor continued to care for Walt and Wally, but she was unable to take them into her home because of her own dogs. In time, the estate was prepared to be sold. The bank handling the estate picked the boys up and brought them to the Lycoming County SPCA. Bank employees’ hearts went out to the duo, and they even called around to area veterinarians to see if they could locate the cats’ records. No match was found, though the boys had been neutered previous to their arrival. 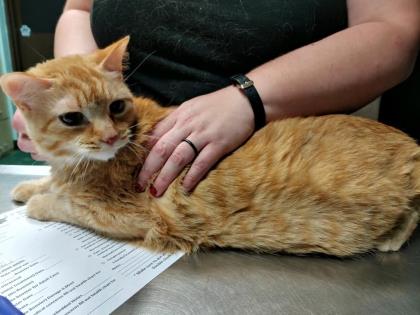 Wally at his intake exam.

Boy, let us tell you, Walt and Wally were so sweet and friendly when they arrived.  A little overweight, but in good shape overall. They were understandably stressed and found great comfort in snuggling up to each other. After spending time de-compressing, the boys were moved out into our adoptable cat room. They spent their days checking out visitors and staff and settling into their new surroundings. They continued to find comfort in one another and caretakers made sure to note that they needed to be adopted together.

Finding a family who wants to adopt more than one pet at a time can be challenging. It can also take a while to find a family who is looking for middle-aged to senior pets. Finding both is surely a blessing. Such a blessing was in store for Walt and Wally. Just a few weeks later, shelter staff were contacted by John and Lana Raymond. The couple’s two senior cats had recently passed away and they were looking to adopt two older cats. The kicker? They were from Massachusetts, four hundred and twenty miles away!

Wally and Walt, renamed Monty and Zorro, heading home in their new carriers.

As it turns out, John and Lana were long-time residents of Williamsport, PA, and long-time supporters of the SPCA. They were moving to coastal Massachusetts to be near their son, who, John jokes, “Promised to take care of us in our old age.” They were coming back to the area to pick up their final things when John spotted Walt and Wally on the SPCA website. “We were going for anything that was a good fit and had had a good experience with two cats recently,” John relates, “We knew it would be difficult to place the boys since they were bonded and also because of their age.”

“Actually, their ages were a good fit for us,” says Lana, “Our previous cats, also adopted from the Lycoming County SPCA, lived to be 18 and 16 years old, and now that I am 70, knowing that these boys might live another 10 years with us was a good fit. I want to be able to care for them well their whole lives.”

The couple met the cats and the deal was sealed. The day they headed up to Massachusetts, they loaded the boys into comfy carriers and they got to ride upfront for the whole journey. They stopped for litterbox breaks and they bought them toys. Re-named Monty and Zorro, the brothers did very well on their trip and settled into their new home quickly. “Within one day, they acted like they had lived here forever.” The boys have continued to be “extremely sweet and friendly” and even thoroughly enjoyed a trip to the groomers’. It is a happily-ever-after for Monty and Zorro!

Celebrating America's Dog
Velvet: the little guinea pig that could