Brotherly and Sisterly Love: Bonded Siblings Long for a Home Together

Church loves Rose. And Rose loves Church. Without each other, well, life just doesn’t feel as good. The sweet brother and sister have been bonded since birth. Their life journey has included many ups and downs, but one thing has remained constant: the love they have for each other. 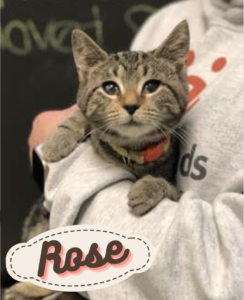 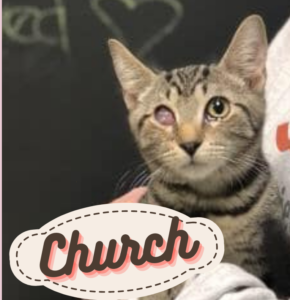 Rose and Church were found as teeny tiny babies, outside and alone without their mother. Their finder watched for a while, but their mother did not re-appear, and boy, the kittens sure did look sick. She decided to contact a volunteer of the SPCA she knew who fosters kittens. The foster mom agreed to take them in and see what she could do for them.

The kittens were found as “very, very sick little bottle babies,” relates Kelli, Animal Team Lead for the Lycoming County SPCA. They stayed at their foster home to recuperate, and it took a lot of time, attention, and medical care for them to fight their way back to good health. In particular, each kitten came in with terrible eye infections. Their eyes were crusted over, red, sore, and very weepy. It took weeks of antibiotics for their eyes to begin to return to normal, and even then, their eyes sustained permanent damage. When the swelling went down, it was discovered that both Church’s and Rose’s third eyelids were permanently adhered to their eyes, and the eyelids needed to be removed. Even after the surgery, their eyes remain cloudy and they have permanent vision loss.

The two siblings also had to battle back from upper respiratory infections, fleas, and ear mites, which may explain why they are a tad shy around people. Their first few interactions with humans usually involved a fair amount of poking and prodding. But now, at eight months old, the best buds are ready for a forever home – together, of course. “They love to play and cuddle together and are overall very sweet playful kittens,” says Kelli. After all that they have gone through, the duo deserves nothing but the best. Could you be the one to give the brave little warriors the loving forever home they dream of?

A Boy and His Hammock
Magical Days for Mattie