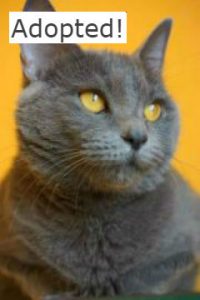 Hazel Grace was promised love, but it fell through. Adopted from our shelter in 2014, she was recently brought in as a stray after being found hit by a car. SPCA staff rushed her to a local vet, where her left rear leg had to be amputated.

Despite her rough past, Hazel Grace continues to love. She is a quiet cat who enjoys observing the world around her and taking it in slowly, often lying in the back of her pen and quietly watching potential adopters walk by. She is very lovable and enjoys being held. Her beautiful gray coat is soft and silky, and she has curious deep yellow eyes.

When she first came into the shelter in 2014, she was expecting a litter of kittens. She had five healthy babies and was a phenomenal mother. She would love to share that depth of love and devotion with her next forever family. Could you be the one to show Hazel Grace that true love really exists? She is all healed up from surgery and patiently waiting in Pen 11 of our Cat Room.

Hazel Grace was adopted on Monday, March 12th. Her new family saw her on a recent special needs Facebook post that our Executive Director, Vickie Stryker, created. We are thrilled that Hazel Grace has a new home and a new family!

Cute Kittens Need Your Help
We are open by appointment. Please call 570-322-4646 for your appointment. We ask that you wear a mask when you come in. The SPCA is following CDC and PA Dept. of Health guidelines by limiting the number of people in the shelter, social distancing, and sanitation. We appreciate your cooperation.