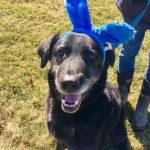 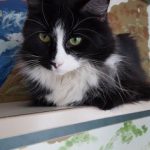 Welcome to this week’s featured Pets of the Week.  This week, we are getting to know Zinc and Collette. 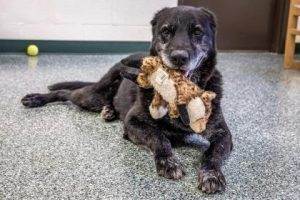 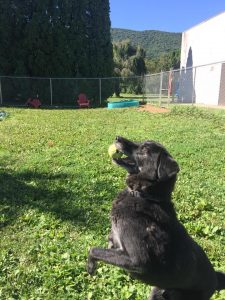 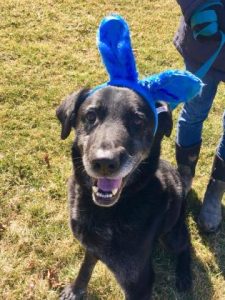 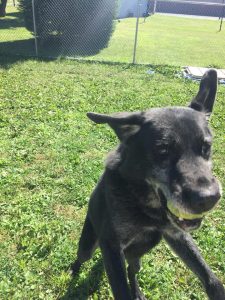 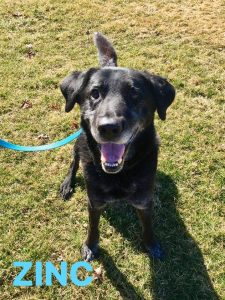 We all love Zinc.  He is that affable oaf of an older gentleman who brings a smile to everyone’s face.  We do not know much about Zinc’s past, other than that he was brought to the shelter this winter as a stray.  He had been found wandering in downtown Williamsport, hanging out near an ice cream shop.  Though it was cold out, one cannot help but wonder if Zinc has a special liking for doggie ice cream?  Due to some of his behavior traits, it seems as if nine-year-old Zinc has spent a significant amount of his life outside.  Indeed, he enjoys being outdoors and exploring, but he is also a big people-lover.  He politely greets new people and is a quiet gentleman overall.  As you can see from his video, Zinc is a gentle lovebug.  Once the video was complete, he went back to playing with his toys and fetching a pillow for us that had somehow gotten under the couch.

We believe that Zinc will make a great fit for folks with a quieter lifestyle (we recommend an adult-only home due to his size and energy, at times).  He enjoys walks, but he is also happiest simply being in the room with someone nearby while playing with his toys (he LOVES toys).  He can be a bit hesitant when someone reaches for his food or toy, but he does not react much more than that.  He does have a zest for anything small and moving, so we recommend that he be the only pet in the household.  Zinc was adopted from the shelter once before, back when he first came in.  His forever home lasted only two weeks, however, when his owner felt that he was unable to properly assist Zinc in learning how to be thoroughly housebroken (he has a tendency to mark things – something that we are working on and believe may be caused because he lived outside for so long).

During his stay at the shelter, Zinc has continued to win over the hearts of staff and volunteers.  He does not demand much, but he gives plenty of love in return.  We will be delighted when the genteel older man finds a loving forever home for his golden years.  He wants nothing more than a big, plush bed to stretch out on and a few toys and hugs from his favorite humans.  Think you have room in your heart and home for Zinc?  Do not hesitate!  A meet and greet can tell you plenty more.  Zinc is ready and available in Kennel 81. 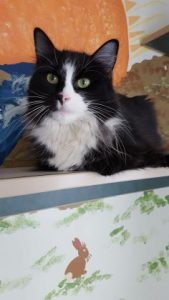 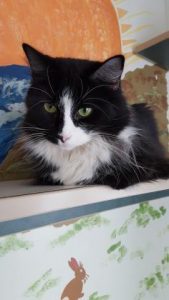 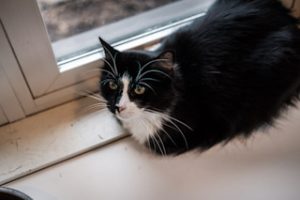 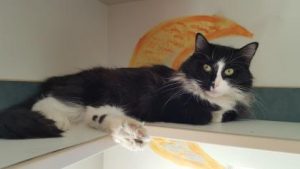 “Collette is an interesting girl that likes to show us many different personalities here,” says Animal Team Leader, Kelli Smith. Brought to the shelter as a stray in June 2017, three-year-old Collette is one of the shelter’s longest-time residents. She was found alone in downtown Williamsport and we are not sure how much human interaction or time inside of a home that she had.

At first, Kelli explains, “she was very fear-reactive in her cage at times, but then would coax people over with her playful cuteness, only to slap them when they got too close. We moved her to the Four Seasons room to give her more space and to be able to get away when she felt stressed.” She has been doing very well in there. She used to hide up on the shelves all of the time, but now she spends most of her time down on the ground and on the window sills. She is getting used to being petted more, but she still does not like fast movements, rough petting, or being carried. It does take her a while to feel comfortable with a person and in general she seems to have a more independent personality. She LOVES laying on the window sills watching the world go by outside; she spends most of her day there with her nose pressed against the glass.

Collette does okay with the other cats in the room, but does bicker at times with the other dominant female in the room, so perhaps she would do best in a home with a submissive cat that will not try to push her buttons. Kelli recommends that she be started off in one room for several weeks, or perhaps even as a barn cat. Collette’s adopter will need to be aware that she is going to take a while, but, as Kelli explains, “she is so worth it!”

8/19 - Featured Pets of the Week - Octavia and Arnold
8/5 - Featured Pets of the Week - Jack & Precious, Inga & Asia
We are open by appointment. Please call 570-322-4646 for your appointment. We ask that you wear a mask when you come in. The SPCA is following CDC and PA Dept. of Health guidelines by limiting the number of people in the shelter, social distancing, and sanitation. We appreciate your cooperation.