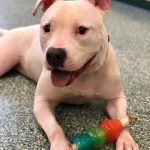 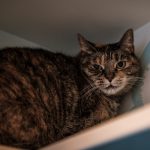 Welcome to this week’s featured Pets of the Week.  This week, we are getting to know Kain, our three-legged pup, and Lola, a quiet gal, both of whom are looking for their forever homes!  Let’s get to know their stories: 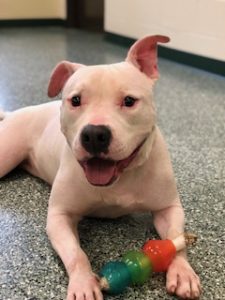 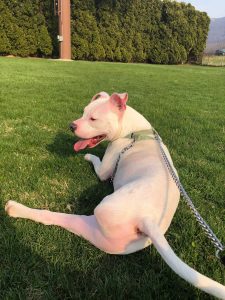 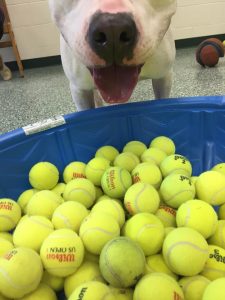 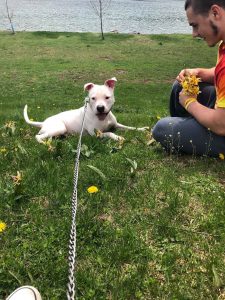 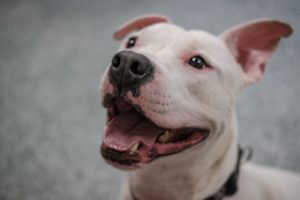 Meet Kain, a lovable pup waiting for his forever home. There are many adjectives that could be used to describe Kain: three-legged, Pitbull-Terrier-mix, 1-year-old. However, none of these adjectives properly exemplifies all that Kain is. He is a zippy, happy, friendly young fellow who loves to romp and run and play. He has been at the shelter since last November and as Melanie, one of his favorite volunteers, says, “I see potential adopters walk past his kennel all the time and say, ‘Aw, he only has three legs. Poor fellow.’ They move on because they think he has or will have a lot of medical issues. But this is not the case.” In fact, Kain is healthy and fit as a fiddle. Just under two years old, he is full of energy and ready for a home of his own where he run and play to his heart’s delight.

“Kain has made some great strides here in the shelter, thanks to our volunteers,” Kennel Manager, Kabrina Schweikart, explains. “When he first got here he was very hyper, overzealous, and hard to manage.” Our volunteers and staff have been hard at work teaching him basic manners and socialization. He has become more relaxed and gentle and has just a few more leash handling skills to work on until he is quite accomplished. Our kennel staff report that he really enjoys plush toys, and for the most part, does a good job not shredding them when they are in his kennel (every once in a while they get the best of him). He also has a deep love for big, cozy blankets and riding in the car.

Kain also does very well with humans. “He literally just melts into you when you are petting or scratching his back,” Kabrina reports. He handles strangers well, and we encourage his new family to reward him for showing good behavior when new people come to the home. In terms of living with other pets, Kabrina went on to explain, “We know from past experiences that Kain is best as an only pet. Before he came to the shelter, he had lived in a foster home with other animals, and there were altercations between them. Kain is going to thrive best as an only pet, both because of his physical conditions and his past experiences with other animals.” We also recommend that he go to a home with older children or adults because of his energy. He may accidentally tip over a youngster in his excitement.

Now for an often-asked question: how did Kain lose his leg? He was born with all four, but lost his leg sometime before or around his first birthday, before he came to the shelter.

Kabrina concludes, “With some time, training, and a bit of patience, Kain can really thrive and become the amazing 3-legged wonder dog he was meant to be.” Interested in adopting Kain? He would love a meet and greet! You can find him in Kennel 54. 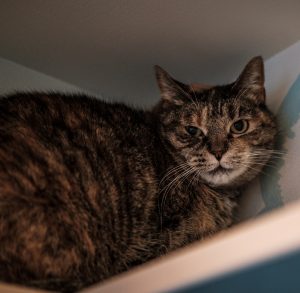 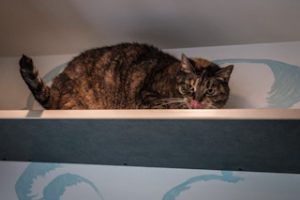 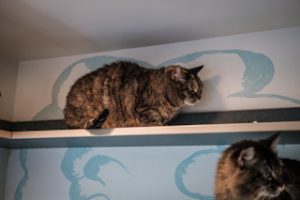 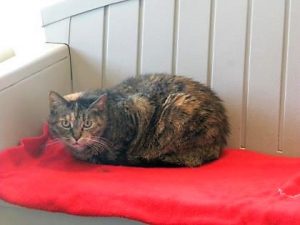 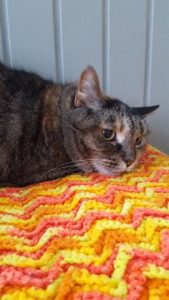 Dearest Lola, what a shy, sweet soul.  Lola is one of the shelter’s longest cat residents.  She was brought to the shelter in March of 2017. Her previous owner had her for about two years, after finding her stray in the middle of the winter. Her owner enjoyed having Lola, but was struggling with Lola’s attitude toward her other ill female cat. Lola has found shelter life to be confusing, at best, and downright terrifying at times. Her natural personality is quiet and reserved, so she finds all of the noises and commotion overwhelming.  We monitored her behavior in one of our normal cat pens for many months, but, as Animal Team Leader, Kelli Smith, explains, “We decided that she had gotten herself so stressed since she’s been in the cage for so many months, that she wasn’t going to improve by keeping her in there. We moved her to the Four Seasons Room to see if having the freedom to move away from us would help her relax and start to open up again.”  We were unsure at first, since there would be many other female cats in the room, but Lola has adjusted well and has accepted the other ladies.

Lola’s previous owner described her as “a sweet kitty. She’s shy, but warms up and loves petting.”   She went on to say that Lola enjoys playing with string, catnip, and soft toys, and likes to sleep on the couch or a chair if it is covered with a big, soft blankie. Sounds good, doesn’t it? In the Four Seasons Room, Lola continues to be a bit unsure. She is often found up on the shelves, especially if someone new comes in.  She quietly watches from up there, surveying the world.  We would love for Lola to find a good, stable home again.  If you have it in your heart and home to adopt a sweet, shy little kitty, then come in and visit with Lola.  She probably won’t warm up to you at first, but you will surely bring the sunshine back into her world again!  Lola can be seen in the Four Seasons Room of our Cat Room.

8/5 - Featured Pets of the Week - Jack & Precious, Inga & Asia
7/22 - Featured Pets of the Week - Jessie with Toffee and Pickles
We are open by appointment. Please call 570-322-4646 for your appointment. We ask that you wear a mask when you come in. The SPCA is following CDC and PA Dept. of Health guidelines by limiting the number of people in the shelter, social distancing, and sanitation. We appreciate your cooperation.