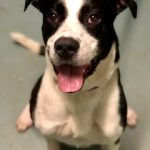 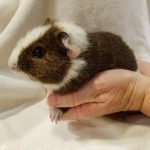 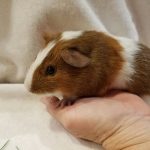 Welcome to this week’s featured Pets of the Week.  We were originally featuring Jessie and guinea pig brothers Prim and Piper on our billboard (on westbound Route 180 near the Panera exit), but…Prim and Piper were adopted!  Congratulations to Prim and Piper!  So, in lieu of Prim and Piper, we are featuring two baby boy guinea pigs, Toffee and Pickles, along with Jessie for the remainder of this week.  Let’s get to know their stories: 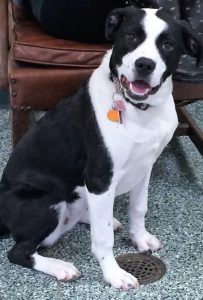 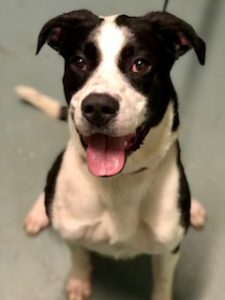 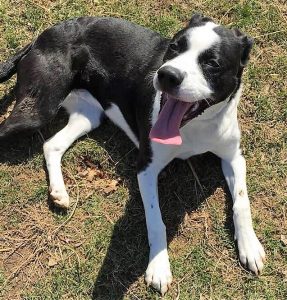 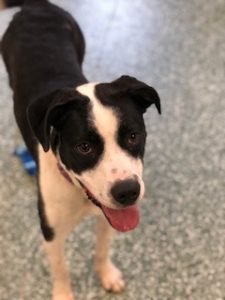 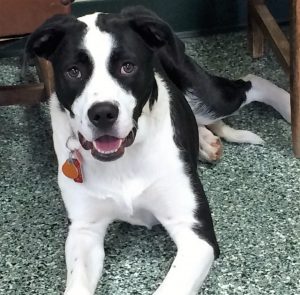 Jessie is a beautiful, unique gal in many ways. She was born at our shelter, which is pretty unique in and of itself. She was such a bundle of cuteness along with all of her brothers and sisters. She was quickly adopted, but was returned this spring around 6 months old. Her family felt that she was bonding hard with them and acting out when strangers came to the home.

Since her arrival back at the shelter, we have enrolled Jessie in what we call “Ann’s Program,” a program by Ann, one of our dedicated volunteers. In the program, pups are taught basic manners and socialization. Jessie has been making strides in this program, and in fact, is now letting a multitude of volunteers walk her, instead of just one or two.

We have found that Jessie is a bit of a fearful dog, not unlike her mother when we first met her. Whether it is nature or nuture, we do not know. We are addressing the symptoms as they come up, and we have found Jessie to be growing in confidence the more we work with her.

At her Behavior Evaluation, Kennel Manager Kabrina Schweikart noted, “Jessie handled the stimulation and correction tests well. Nothing seemed to bother her. For the food test, she seemed a little fearful when we went to handle her while eating, but she did not show any signs of aggression.” She went on to say, “Jessie is very active and seems very eager to interact with the people in the room. But it seems as if she has not had a lot of human interaction. The smallest amount of attention made her very hyper. I think she could really use a good hiking partner, someone to help her burn off some of that extra energy.”

In her previous home, Jessie lived with multiple small children and a cat. She tolerated them all very well and even played with the cat. She enjoys walks immensely (she still needs to learn a few more leash manners) and knows “sit, down, roll over” and “shake.” She likes car rides and playing fetch with squeaky and chew toys.

Her ideal forever family is one where her care is shared between multiple family members. This will help prevent her from bonding with just one person. We have noticed that she does have the tendency to choose one person and guard that person from other people and dogs. Once introduced properly, she is able to accept the other person or dog, but still, the tendency remains and will need further training to help her learn the rules. We recommend that her new family work with a trainer for the best results.

Kabrina wraps up by saying, “Jessie has so much potential to be a really great dog, but she is going to need time, work and exercise.” If sweet Jessie is tugging at your heartstrings, come on in for a meet and greet! She is ready and waiting in Kennel 84. 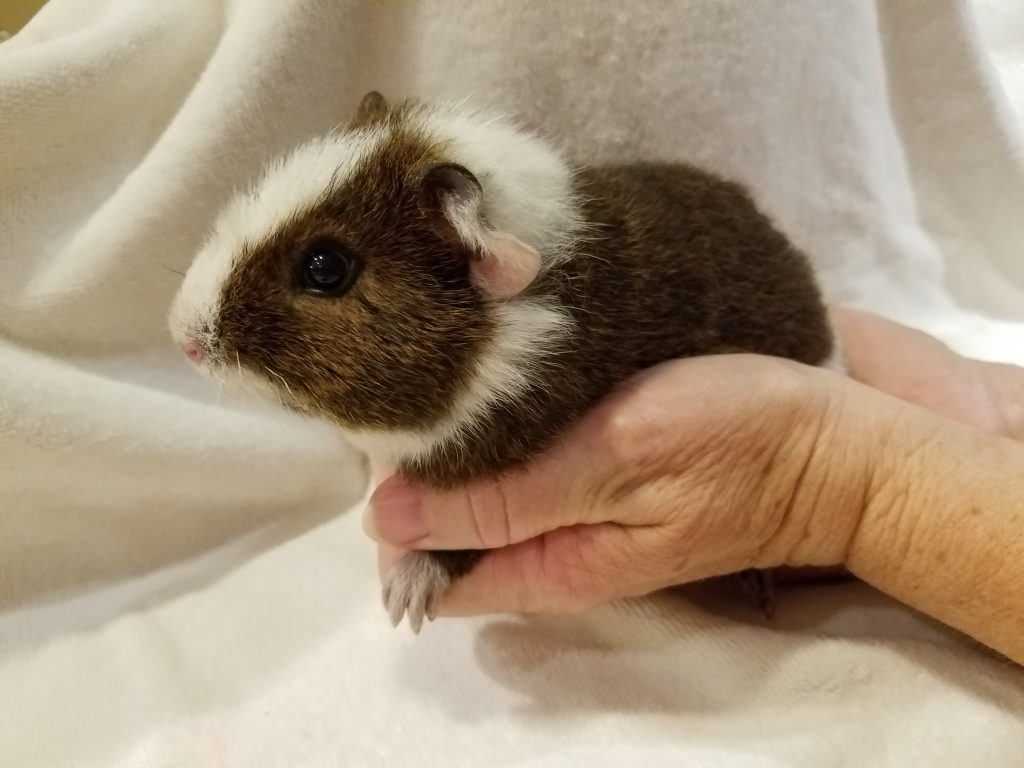 Toffee, with his unique Rex-like hair 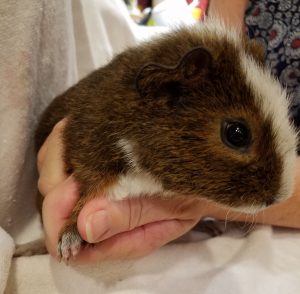 Toffee is such a gentleman. He has the sweetest black eyes and agouti hair. 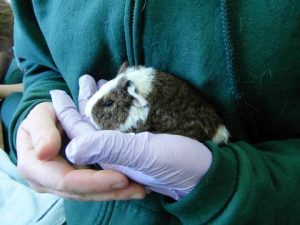 Baby Toffee when he first arrived at the shelter! 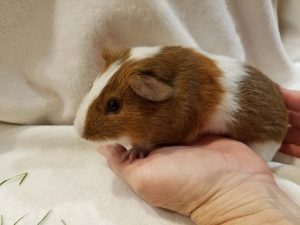 Pickles is such a pleasant dear. He was a friendly piggie right off the bat, often coming up to our hands and sniffing for food. 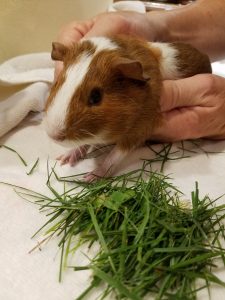 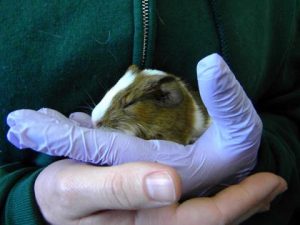 Baby Pickles when he first arrived at the shelter!

*Bonded pair, so they must be adopted together.*

Meet Toffee and Pickles. They arrived at the shelter in May as wee babes, with their momma, Chips, and three other siblings.  (As of this writing, sister Biscoff is available for adoption with momma, Chips.)  Their previous home had dozens of piggies and the owners felt that the large number of pigs was getting to be more than they could handle.  They surrendered a little under forty other piggies to the shelter along with Chips and her babies.

Both boys were a little shy at first but quickly warmed up to treats and attention.  We placed them in a foster home for a few weeks until they were an adoptable age and to further socialize them.  From the start, Pickles was a sweet little fellow.  He was the first to allow us to pick him up and he soon learned that hands coming into the pen were a good thing – it meant treats!  Toffee was a bit shyer and preferred to hide in a pigaloo or corner until he deemed it was safe (usually if Pickles ended up with a tasty snack).

This lovable duo is a delight. Their baby antics, squeaks, and squeals crack us up and will provide you with endless hours of amusement!  Their new forever family will have a lot of fun making cherished memories with them. Toffee and Pickles can be seen in our Lobby.

—
Never had a piggie before? Never fear! These docile, pleasant pets make great first pets for children. They rarely bite and enjoy human companionship, sitting in their person’s lap, munching on snacks. Their favorite foods are guinea pig pellets, timothy hay, grass, and veggies. They like to run around on the floor each day for a bit and often entertain with their squeaks, squeals, and antics. Each pig has its own unique and fully-developed personality. They are social creatures and thrive best when in the presence of other guinea pigs. They live about 5-7 years and often leave behind such loving memories that it is not uncommon for their family to quickly be on the hunt for another piggie to fill their hearts and home.

7/29 – Featured Pets of the Week – Kain and Lola
6/3 - Featured Pets of the Week - Elmo and Cowboy
We are open by appointment. Please call 570-322-4646 for your appointment. We ask that you wear a mask when you come in. The SPCA is following CDC and PA Dept. of Health guidelines by limiting the number of people in the shelter, social distancing, and sanitation. We appreciate your cooperation.